We need cookies to provide you with the best and original experience. If you do not change your settings, we will consider that you will not mind us sending all cookies to you.

International trade is the international system of commodity-money relations, made up of foreign trade all over the world. The development of global trade bases happens on the benefits received by its participating countries. It allows countries, developing their specialization, increase the productivity of its resources and the volume of the consumed products and services to improve the population’s welfare.

The current account represents the records about operations of international trade, including mainly exports and imports. If the export of goods from the country is lower than its imports, then there is a deficit in the current account. Government regulation can help to avoid a current account deficit. There are various methods of regulating the current account balance. These methods are aimed either to promote exports or to limit foreign trade operations. Export promotion is carried out by providing exporters with tax and credit incentives, changes in the exchange rate, and their price affecting incentives.

To create long-term interest in the export, the state provides targeted export credits, insures exporters against economic and political risks, and introduces preferential treatment of depreciation of fixed capital, providing them with other financial incentives in exchange for a commitment to comply with an export program. If the current account deficit is not sustainable, one of the regulatory measures may be lowering the exchange rate of national currency. Such depreciation may be necessary to compensate for the rise in domestic prices, relative to foreign ones. The depreciation will create favorable conditions for replacing imports by domestic production and stimulate external demand for domestic products to the extent that the depreciation of national currency increases the price of traded goods, comparing to non-traded goods and services. The exchange rate adjustment may be supplemented by restrictive monetary and fiscal policy to amplify the shift in relative prices. Therefore, together with careful analyzing and planning, current account regulation may prevent or eliminate its deficit.

Regardless of the current account, each country participating in international trade benefits from it. Ricardo D. showed that each country has a comparative advantage when there are differences between them in the relationship between the production costs of different products. In other words, the ratio of production cost of one good to the production cost of other goods in the country is lower than similar ratio in other countries. The country should specialize in exactly this product and import it in exchange for other goods. In total, consumption in two countries significantly expands as a result of the trade establishment of relations with such production specialization. For example, a small country can produce six units of product Y or thirty units of product X or any combination of these products within the production possibility curve. A rich country can produce eighty units of product Y, or a hundred units of product X or any combination of them within the production possibility curve. Comparing the terms of trade in the two countries shows that people can buy product Y in the small country for 0.5X and sell it in the large country for 1.25X. They can purchase product X in the rich country for 0.8Y and sell it in the small country for 2Y. In other words, if countries would be open to international trade, then a small country would export the product Y to the large country to buy the product X. The rich country, on the contrary, would export goods X to the small country, in exchange for goods Y. The development of international trade would lead to equalization of prices in both countries. Under the new price ratio, countries would be able to expand their consumption. The small country would be able to consume up to 60X, and the large country would be able to consume up to100Y. The total production of goods and 60Y would be 100X, as compared to 85X and 48Y to specialization. According to the Heckscher-Ohlin Model, the country should export those goods, the production of which requires a considerable amount of relative excess production factors. They should import the goods whose production requires the use of relatively deficient factors. Therefore, the countries export surplus factors of production and import the rare ones.

Although all countries benefit from international trade, some of them seek to protect domestic producers from foreign competition. For this purpose, they use such methods as the implementation of the tariff. The tariff is a customs duty on imports. The domestic price of imported goods rises above the world price when a country imposes tariffs. Domestic prices of goods are close to world market prices under free trade. The excess of demand over supply is met by imports. 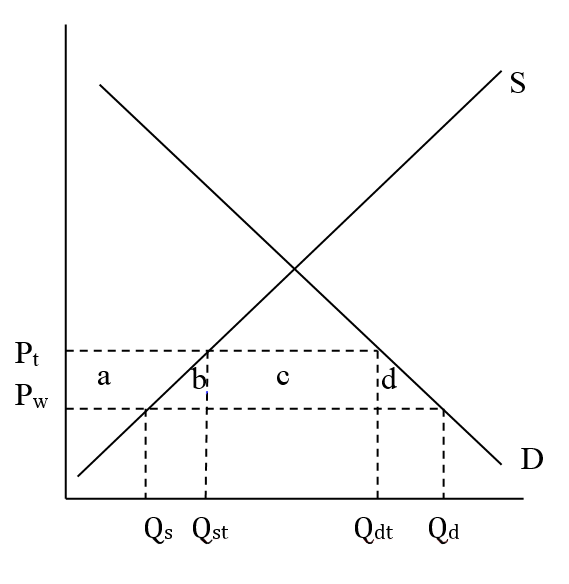 Another way to impact on the volume of international trade is the exchange rate changes. The nominal rate and price are relatively stable in the short term. The real exchange rates change by violating the purchasing power parity. These changes occur together with fluctuations in the value of the net exports and the aggregate demand. Real currency depreciation makes domestic goods relatively cheaper for foreigners. The decrease in the real exchange rates indicates an increase in the competitiveness of domestic products on the world market. The depreciation of the national currency allows exporters of the current country to reduce the prices of their products in foreign currency. They receive the award from an exchange of appreciated foreign currency on relatively cheapened national one and sell their products at prices below the world average. At the same time, the depreciation of national currency increases the cost of imports because foreign exporters are forced to raise prices in national currency to obtain the same amount in their currencies.

The increase in import prices stimulates the reduction of import of goods, their consumption, and the growth of net exports in the short term, and development of the national production of goods instead of the imported ones in the long run. The nominal exchange rates are mobile and respond to changes in price levels in a way that the real exchange rates remain unchanged, ensuring compliance with purchasing power parity in the long term. Therefore, the structure of domestic production and foreign trade changes to balance the real price ratio of the domestic and world prices over time.

Any economic policy may affect international trade. Economic growth is measured mainly by the GDP growth rate, which includes four major components, such as personal consumption expenditures, gross investment, government purchases of goods and services, and net exports. Policies, aimed at stimulating economic growth, may include the elements of fiscal and monetary impact on the economy. Net exports depend on the gross output of the country on the foreign countries GDP, and on the real exchange rate. The appreciation of the domestic currency, resulted from fiscal expansion, reduces exports and increases imports, with the exception of those cases when export demand is inelastic. Moreover, GDP growth increases imports further. Therefore, fiscal policy, aimed at stimulating economic growth, leads to a decrease in net exports, and deterioration of trade balances of the country. At the same time, the monetary policy of cheap money leads to a decrease in interest rates and, consequently, the depreciation of the country’s currency. Low rate increases the attractiveness of exports from the country, and net exports increase. Therefore, policies, correlated with economic growth, are closely linked to foreign trade. However, the impact of fiscal and monetary policies on net exports differs. However, negative influences may also affect economies through international trade.

US subprime mortgage crisis triggered the liquidity crisis of the World Bank in September of 2008. The panic started in the international markets after the bankruptcy of Lehman Brothers. Investors were afraid that other investment banks would also go bankrupt. Banks raised interest rates on credits sharply, in order to compensate for possible defaults on loans.

Banks have stopped lending, including loans for cars purchasing. As a result, sales of auto giants started to decline. From the real estate crisis spread to the real economy. The recession and the decline in production began. This policy of banks played a crucial role in constraining monetary policy. The amount of money in the economy has declined. Money has become more expensive. The demand for money decreased, and, as a consequence, aggregate demand declined. Households reduced their consumption, fearing of a worse scenario. All this taken together affected global production and international trade. Reduced consumption affected imports, as well as domestic products. As a result of the mortgage crisis, international trade in 2009 decreased by 11%, as compared to 2008. NAFTA exports declined by 15% and imports reduced by 17%. Exports and imports in the European Union decreased by 15%, China’s exports fell by 11%, while imports increased by 3% due to the revaluation of the yuan. Japan’s exports fell by 25% and imports fell by 13%.

International trade has its benefits and drawbacks. Therefore, any country in the global economy should consider not only its domestic situation but the world economy and its major partners.